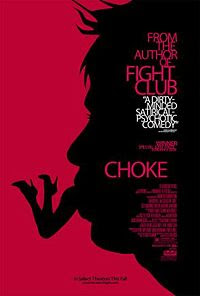 Before a single scene was ever filmed, the movie Choke was at a disadvantage. Whether or not the film would be any good was of little relevance. It was already handicapped by two inevitable comparisons: to the Chuck Palahniuk novel the movie was based on and to the David Fincher’s Fight Club, also adapted from a Palahniuk book. They are fair comparisons for obvious reasons but in the interest of continuing that fairness I watched this movie with two thoughts in mind. One, this wasn’t going to be Fight Club. Choke didn’t have the director, stars or the budget to even come close to competing. Two, and most importantly, the books are always better. Saying you didn’t like a movie adapted from a book because it wasn’t as good as the book is like saying you didn’t like Star Wars because you don’t like science fiction. I’m not saying it’s impossible or that some films haven’t come close, it’s just a stupid thing to say.

Victor Mancini (Sam Rockwell) has, what could be described as, baggage. Lots of baggage. He is a sex addict struggling to complete his recovery. He has a go-nowhere job as a historical interpreter at a colonial-era reenactment community. His mother, Ida (Angelica Huston) is in the hospital with a form of dementia that prevents her from recognizing Victor even though he visits daily. He had to drop out of med school to work and pay for his mother’s medical care. His job doesn’t sufficiently meet all of the financial requirements of the hospital so he has resorted scamming people. He goes to nice restaurants and pretends to be choking so unsuspecting patrons will ‘save’ him, feel bad, and send him money. Money he uses to pay for his mother’s hospital stay. A mother that doesn’t recognize him or deserve the attention she is getting. You get the idea; he’s got problems.

If that wasn’t enough, Victor’s best friend Denny (Brad William Henke) always tries his best to help when and where he can, but has his own bag of sexual perversions to work through. And to further add to the confusion, Paige Marshall (Kelly Macdonald), a doctor at Ida’s hospital, throws the entire foundation of Victor’s existence for a loop with her idea for a ‘miracle cure’. There is enough craziness to go around and Victor always ends up in the middle, even if it is mostly of his own construction. He works during the day, then goes to see his mother, tours sex addict support groups at night and does it all over again the next day. The movie plays less with traditional form of narrative direction than a cross-sample of everything Victor would encounter during the course of any given week. Like the book, the movie ends without a great deal of growth from the main characters; the only uplifting part is in the hope that growth could at least be possible. Which I guess is growth, more or less.

First time director Clark Gregg (who also wrote the screenplay), works the camera with the efficiency of someone far more seasoned. He is able to juggle the multiple tones of the film to quite a remarkable degree of success. The movie doesn’t capture the tone of the book, but it also doesn’t seem like it was trying. It is always a risk, especially when dealing with someone else’s celebrated words and vision, but I admire his impudent approach. What’s more, he was able to get some really great performances out of his cast, especially Sam Rockwell. The character of Victor Mancini is so layered that it would be difficult for an actor of lesser talent to tie them together as seamlessly as Rockwell does. His jumping back and forth between the vast swings of emotion was fun and pretty impressive to watch.

I’m not saying Choke is without its problems. Denny’s rock castle needed either far more or far less screen time because it just felt thrown in for added weirdness. The flashbacks to Victor’s childhood were too few in number and information to give us any real insight, and the big twist at the end felt clumsy and anticlimactic. But what did impress me was that Clark Gregg was able to take this material, spin it, and give us something almost completely different. The movie is much more a twisted romantic black comedy than the dark satire of the book. They both have their strengths but the movie works, either because of or in spite of, the liberties it took with the written story.

Just don’t ask me which I liked better.

And there's the rub.