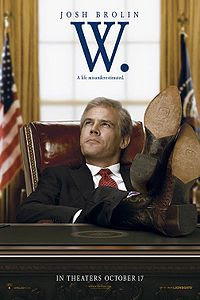 Any comedian will tell you the secret to a good joke is to make it accessible, have a good setup, and kill with the punch line. I don’t know that there is necessarily a golden formula but this seems like pretty sound advice on a general level. I suppose variations of the same thing can be said about making movies. Director Oliver Stone had nothing if not a golden setup. A movie about the exiting President of the United States, while he is still in office, mere days before the election that would remove him from power, and with just enough time to reflect on his last eight years in office. Stone being no stranger to controversy or films of historical significance seemed to be in a perfect position to move in for the kill. Instead we got what those in retail refer to as the old ‘bait and switch’.

W. does show us what we expected to see from this movie; that George W. Bush (Josh Brolin) grew up as a hard partying man of privilege who rarely had to deal with consequences for anything he did or said. He was an irresponsible, womanizing, carousing, spoiled little rich kid who wouldn’t and couldn’t hold a job. Any trouble he got into was fixed by a phone call from his father, George H.W. Bush (James Cromwell). It also told how Dubya fell ass-backwards into politics and eventually became the leader of the free world. It would almost be an inspiring “little engine that could” type story, if not for knowing the details about how everything actually turned out. The pre-release posters and trailers suggested the movie would be a caustic illustration of the rise and fall of the 43rd President of the United States. Turns out, W. shows a surprising lack of poignancy, political or otherwise.

Bear in mind, Oliver Stone is a man who built a career out of making controversial films based on actual events of historical significance. He’s not even a stranger to Presidential controversy (JFK, Nixon). Stone has turned this type of film into a brand name, largely based on the controversy his films willfully embody. This time, for one reason or another, he seemed to completely abandon ship. W. didn’t have enough bite to be the satire it wanted but was just mean enough to be unsympathetic. Just when I thought I understood which angle they were going for, the table turned. With a film like W. you expect, if not demand, that that the film pick a side, especially with Stone in the driver’s seat. The expectation was built before a page of dialogue was ever written.

After seeing the film I started questioning the timing of its release. If it was satire they were going for, why now? What left is there to gain by taking one last whack at a piñata that has long since been emptied? Wouldn’t that approach have been a lot more impactful had it waited until the cake cooled before applying the frosting? If it was sympathy they were after, again, why now? Wouldn’t it have helped out even a year ago before Bush’s legacy had already been cemented?

There is just too much that didn’t fit together for W. to have worked like it was supposed to. In an effort to rush it into theatres before the election the whole thing felt slapped together. For as disconnected a film as it was there were some really great performances; namely Josh Brolin as Dubya and Richard Dreyfuss as his second in command, Dick Cheney. Both men opted for performance over impression and both helped carry the film through some of the slower parts. This is all far more than I can say for the treatment Thandie Newton gave to the character of Condoleezza Rice. It is less surprising how bad per impersonation was but rather how no one else filming noticed how bad it was. Regarding performances, the problem in a movie with this many moving parts is that it’s impossible for the array of characters to get their just development. In the end it mostly felt like a bunch of famous people dressing up and acting like a bunch of other famous people doing MADtv skits out of order for two hours.

Every time W. had a chance to go for the throat, Stone turned a sympathetic eye on his subject and gave him an excuse. By suggesting that Bush has a reason for being the way he is, you remove any accountability he has coming because it suggests that he didn’t have a choice. It’s not just a stretch but more a shame that Stone thought it would be just that easy.

And there’s the rub. 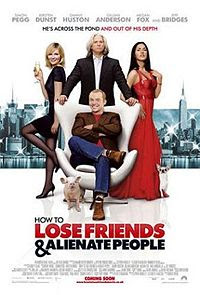 How to Lose Friends & Alienate People reminds me of a dog I had when I was a kid. It was this huge Great Dane that would lumber around and trip all over himself and destroy anything in the process. Anyone who saw him for the first time would be scared to death of him, but he was dumb as a bag of hammers and just a harmless. That’s pretty much where the comparison stops because I loved that dog and still have fond memories of him. On the other hand, I saw the movie late last night and can barely remember it enough to write this review.

Sidney Young (Simon Pegg) runs a British celebrity rag and makes a living pissing people off; crashing celebrity parties to get close to people more famous than him and patting himself on the back when he is successful at doing so. In his pocket he proudly keeps a laminated photo of himself in the wrong end of a Clint Eastwood headlock. He’s that guy. For no reason that is explained with any sensibility, he is recruited by Clayton Harding (Jeff Bridges) to come across the pond and work for Sharps Magazine, an upscale New York magazine with celebrity reputation. Even before his first day of work he is already trying to use his new position to get women to notice him. He hits on a girl at a bar named Alison (Kirsten Dunst). Guess where she works? That ends without mention and we’ll just say the first woman he takes home from a club doesn’t go as planned. His first night in America is moderately funny, if not 100 percent predictable but by the time he starts working you can see exactly where it’s headed. He causes random mischief over and over again, isn’t nearly as victimized by repercussions as he should be for the stunts he pulls, plays it straight for awhile to get ahead then swings for a bit of personal vindication. It’s a grown up version of Home Alone without the holiday sentiment. Or at least without the holiday.

I have long since conceded to the fact that a majority of the movies we see during any given year will follow a clearly laid path, so to dislike a movie just because the formula is predictable is a little bit of a back-handed complaint. I can handle formula so long as the pieces that make it up shine through enough to get you passed it. There were enough reasons why How to Lose Friends & Alienate People could have been good. Hollywood satire is always a ripe sandbox to play in if it’s done even half right and Simon Pegg has proven his British comedy reliability in the past with movies like Shaun of the Dead and Hot Fuzz. The only thing he proved this time around is that without Edgar Wright, his manic little British-guy act isn’t nearly as heartily received. Megan Fox as Sophie Maes, a young starlet on the rise, would have been funnier if it didn’t seem like she was just playing herself. Maybe that was the point, but it was boring and obvious. Kirsten Dunst continues to prove her transparency with each passing role. As far as performances go, for as little screen time as they were allowed, Gillian Anderson as Sophie Maes’ puppeteer of a publicist and Jeff Bridges were both dead on. I’d like to imagine that both of their performances were what the rest of the cast was going for.

The reason How to Lose Friends & Alienate People fell apart were that the pieces of the machine that should have allowed it to rise above its own mediocrity simply didn’t deliver as promised. It wanted to be a scathing look at the Hollywood machine from the inside perspective of an outsider who doesn’t fit the mold. When it looked like it wasn’t getting there on concept alone it tried to incorporate the use of that famous dry British wit for added punch. But just when it started to show its teeth it played it safe instead of going for the kill just like that stupid dog I used to have. It’s too bad too, because the movie had the makings, at least in concept, of a pretty decent little comedy but like the man the movie is based on, found ways to screw it up without so much as an ounce of effort.

And there's the rub.